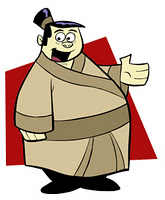 Join us this week on Comics Coast To Coast as we talk to Adrian Ropp of the webcomic Chim Chum and the Portly Samurai.

Chim Chum and the Portly Samurai is a daily (Monday through Friday) all-ages comic strip written and drawn by Adrian Ropp.  It follows the adventures of an as-yet-to-be-named samurai of questionable origins and his silent sidekick, a small fox named Chim Chum. The comic generally follows a single-panel gag format.  A larger, ongoing story remains under wraps, but is in the works.
THE PORTLY SAMURAI

The Portly Samurai hails from Ancient China, and has a long, sordid past he does not like to talk about.  Because of his obvious physical build, freelancing as a samurai is hardly a lucrative position.  P.S. relies on quick turns of fortune and the clever cuteness of his diminutive pal to maintain his dietary standards.

Chim Chum the fox is something of an enigma.  There’s a lot of personality crammed into this small package, but little is actually known Chim Chum’s origins.  Equal parts best friend and main antagonist to the Portly Samurai, Chim Chum seems to enjoy being part of the Dysfunctional Duo.

[…] artist.  I had a blast!  If you’d like to hear the whole interview, it’s available here.  (Oh, and there’s a special surprise reveal about the inspiration for Chim […]