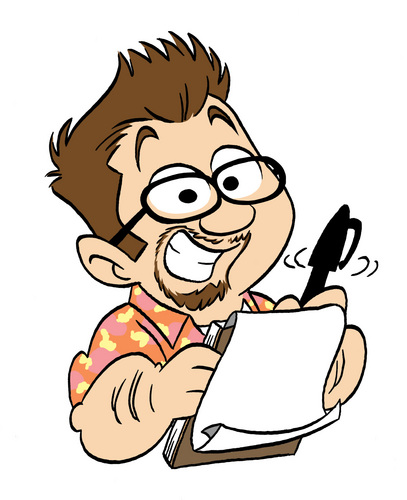 On this episode of Comics Coast To Coast we talk to Jay Fosgitt of Dead Duck (and so much more!)

Jay P. Fosgitt is the creator of the graphic novel/web comic DEAD DUCK, and the writer/artist on LITTLE GREEN MEN, DINO DUCK, and OLD MCMONSTER’S HAUNTED FARM, all published by Ape Entertainment. Jay’s other creator-owned projects are NECRONOMICOMICS, a single panel comic that lampoons horror films, which is published monthly in Rue Morgue Magazine, and an all-ages comic called BODIE TROLL that is currently in talks to be published in mid 2013. Jay has contributed artwork for sketch card series such as STAR WARS GALAXY 5 for Topps Entertainment and MARVEL: DANGEROUS DIVAS, MARVEL UNIVERSE 2011, and MARVEL: BRONZE AGE for Rittenhouse Archives, and ARCHIE, SABRINA, and HACK/SLASH for 5finity Productions. Jay will also be the letterer on comic creator Guy Davis’ upcoming comic, The Marquis and the Midwife. Most recently, Jay’s artwork has been featured in DREAMWORKS ANIMATION MAGAZINE, and in the book TEAM CUL DE SAC: CARTOONISTS DRAW THE LINE AT PARKINSON’S, alongside other professional cartoonists who drew characters from Richard Thompson’s comic strip “Cul De Sac”, with proceeds going towards a cure for Parkinson’s Disease. Jay is also a member of The National Cartoonists Society. He lives in Ann Arbor with his wife Laura and cat Goonie. Visit his website at: www.jayfosgitt.com.

Stop thinking of death as an abstract concept. He’s a living person (well, more like un-living). His name is J.P. Yorick, better known as the Grim Reaper. When your drunk uncle fell off the roof and impaled himself on a lawn gnome, J.P. was there. When the dictator of some fourth world nation was assassinated with a pillow case full of lit charcoal, J.P. was there. When Elvis croaked on the can with a gut full of drugs and a half completed bowel movement on his to-do list, J.P. was there. But he wasn’t happy about it.

It was eons past when J.P., already a crotchety soul with a six-carton a day smoking habit, took over a previously unclaimed pocket of afterlife and built the city of Rigormortitropolis, outpost for his company, RIP Inc. Here he brought the dead to be processed before being sent to their final destinations, the last rest stop on the road trip to oblivion. Gradually, those who had nowhere better to go stuck around and built up the city’s ever-swelling population.

For countless eons, J.P. shouldered the company workload himself. But during the dark ages, thanks in part to the plague and an axe-happy penal system, the workload became too much for J.P. to handle. He soon hired an ambitious young corpse named Estelle to run the home office. But even that wasn’t enough. J.P. needed a man in the field to do his deliveries. A lackey, a patsy, a toadie…a minion.

Enter Dead Duck, the flat footed, scrappy little punching bag that J.P. had met under mysterious circumstances and adopted as his ward. With no one better to do his bidding, J.P, made Dead Duck his first minion, responsible for delivering the dead in all their forms. But because his confidence in Dead Duck was on shaky ground, J.P. gave him a zombie sidekick, the astutely named and bubble-headed Zombie Chick.

More minions would fill J.P.’s ranks as the years wore on, but Dead Duck was always the stand out. With a knack for landing the weirdest and most unconventional deaths (and a bigger knack for screwing them up somehow), his work history became the stuff of legend. But Dead Duck has always managed to keep things in perspective. After all, it’s not the most glamorous gig to deliver the dead. But it’s a living.