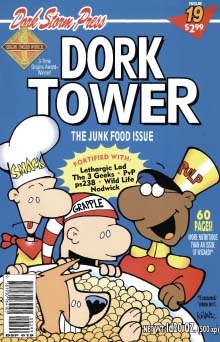 On this episode of Comics Coast To Coast we talk to John Kovalic: cartoonist superstar. Creator of Dork Tower and artist behind some of your favorite games like Munchkin.

About The Artist:John Kovalic’s cartoons have appeared everywhere from his hometown WISCONSIN STATE JOURNAL (Madison, WI) to the NEW YORK TIMES and DRAGON MAGAZINE. His creations include the sell-out comic book sensation DORK TOWER and “DR. BLINK: SUPERHERO SHRINK,” as well as SNAPDRAGONS, NEWBIES, WILD LIFE, BEACHED, and panel cartoons including MURPHY’S RULES, THE UNSPEAKABLE OAF and others.A co-founder and co-owner of Out of the Box Games, and a cartoonist for Steve Jackson Games, John has illustrated over 100 games and game supplements, and is at least in part responsible for best-sellers like APPLES TO APPLES (A GAMES Magazine Hall of Fame inductee) , MUNCHKIN, CHEZ GEEK and BLINK. He is closing in on 4,000 MUNCHKIN cards drawn, and boy, are his arms tired.He was the first cartoonist inducted into the Game Manufacturers Association (GAMA) Hall of fame. In his spare time, John searches for spare time.
-source https://dorktower.com
About Dork Tower:DORK TOWER is the comic strip running three times a week at DorkTower.com and WIRED.com , and monthly in Game Trade Magazine. Once upon a time, it also ran in Dragon magazine, Scrye magazine, Star Wars Insider, and GAMES magazine. Dork Tower is also from time to time a comic book published by Dork Storm Press.DORK TOWER is for anybody who’s ever been burned being an early adapter; who’s made more Twitter tweets than actual Twitter followers; who’s ever gone to a Star Trek convention; who’s ever played Dungeons and Dragons; who suspects Anime is more than just a passing ad; and who’s been fragged by a Gravity Hammer in Halo III – or anyone who KNOWS one of these people.But it’s REALLY for people who know the significance of “42″; who have bookmarked more than one area of thinkgeek.com; who’ve memorized very lyric to Jonathan Coulton’s ouvre; who’ve cataloged which Classic Trek episodes involved the Prime Directive; and who know the names of six people and a cat that make regular appearances in Wil Wheaton’s blog. And, of course, it’s for people who know that HAN SHOT FIRST!

DORK TOWER the multi-award-winning story of Matt, Igor, Ken, Carson the Muskrat (yes, he’s a muskrat) and Gilly, the Perky Goth. They’re trapped in a world they never made… but are nevertheless striving to create a realistic yet playable simulation thereof!