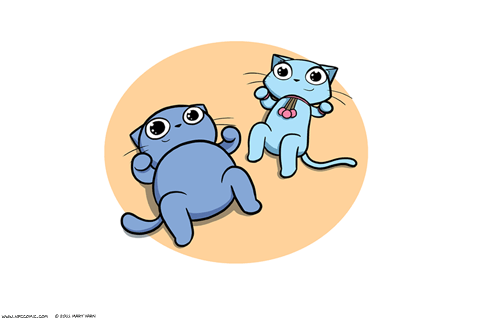 Join us this week on Comics Coast To Coast as Brian Dunaway (briandunaway.com) , Joel Duggan (StarCrossedOnline) and Denver Brubaker (thecheckeredman.com) talk to Mary Varn of NPC Comic about her comic and career. Thanks to all!

Hi! I’m Mary. I’m a freelance animator in New York City. I started NPC (Non-Player Character) in Feb 2009 as a weekly strip when I realized I was playing too much World of Warcraft and wanted a creative outlet between freelance jobs. I’m having a ton of fun making NPC, and increased the update schedule to Mon-Wed-Fri in the summer of 2009. I don’t make a living off the comic, but it supplements my freelance income and makes me very happy. My animation gigs have included MTV’s DJ and the Fro, Disney’s Little Einsteins, and the Richard Linklater films Waking Life and A Scanner Darkly. I grew up as an Air Force brat in the American south and Germany. Miscellaneous trivia: I was born in Italy, I’m vegan, and work mostly on a mac. I live in Brooklyn, NY with my boyfriend, John, and two cuddly monsters disguised as Siamese cats. No, the cats are not vegan.My favorite video games include WoW, Portal, The Legend of Zelda: The Minish Cap, Civ 2, and Minecraft. I also get a kick out of playing board games and D&D. Favorite board games include Dominion, Settlers of Catan, Carcassonne, and Small World.

I update the blog under the comic with NPC news, sketch previews, reader polls, and random geekery. My personal blog is Varnacular.com.

Thanks for the webcomic pick of the week. I’m honored!
It’s so nice to hear you think my characters are cute 😀

Great interview…I love how you guys get into the creative and technical sides while having such a casual style of interviewing….you get more out of the cartoonists by taking such an approach and it’s great listening….so glad you’re back with some regualr interviews…keep up the good work…Mojo caught my eye when I whne to the multi cartoon website as well…beautiful style…

[…] Check out the show here: https://comicscoasttocoast.com/episode-119the-mary-varn-interview-2 […]