Join us this week on Comics Coast To Coast as Brian Dunaway (briandunaway.com) , Joel Duggan (StarCrossedOnline) and Denver Brubaker (thecheckeredman.com) talk to Chris Flick of Capes ‘n Babes about his comic and career. Thanks to all! 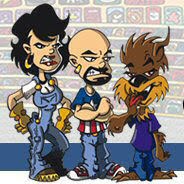 All about Chris – the artist and writer of Capes ‘N’ Babes…

I grew up a poor white child…

Wait! That’s not right. It’s not even the correct quote – although it’s not altogether inaccurate. But since you clicked on this link, I guess I should feel obligated to tell you about myself since you’re obviously interested.

I grew up an Air Force Sargent brat (that’s where the poor white child comes in). I was born in Virginia but thanks to my dad’s time in the military, I’ve lived in Germany, California, Nevada, Florida and, eventually, back to Virginia – where I’ve currently lived since the 7th grade.

When I got to high school and had to decide on a particular language, I found out all too painfully that living four and a half years of my life in Germany did absolutely no good when it came to trying to learn the language. Maybe it had something to do with the fact that I was 8 when my dad was originally stationed in Germany.

At a very young age, I discovered my love of two things: baseball and art.

In high school, during my senior year, I was my baseball team’s starting second baseman but contracted a very serious case of mono – effectively ending my dreams of going pro (not that that would have happened anyway with my lack of speed or power). So I got a lot more serious about my art and went to Maryland College of Art and Design for one year. Although it was a great learning experience and REALLY forced me to get serious about my art – even more so then high school did – I decided I needed – and wanted more – of a true college experience. So I transferred to Radford University (but not before I met my eventual wife at MCAD).

At Radford, my art interest shifted to graphic design and illustration. I also created my first comic strip called 525 Calhoun Street – my off-campus apartment address at the time. The comic strip featured myself and all my friends. It ran in the college “alternative” newspaper as the newspaper tended to have a more critical view of the university then the official school newspaper did.

I also was the university mascot for two years (“Rowdy Red”).

Upon graduating, I did a wide variety of graphic design jobs – from paste-up artist for a local print shop to t-shirt artist and silk-screener until getting my “big break” by becoming a newspaper production artist. I specialized in designing automobile ads – which is especially ironic as I have nearly no auto mechanical skills whatsoever. I also occasionally did some editorial illustrations during my time with the newspaper.

Eventually, my skills as an automobile ad designer landed me at an advertising agency with a two hour commute (thanks to the wonderful Washington Metropolitan traffic). But it was during my time at this ad agency that I discovered my interest and love for the web so I started teaching myself web design and html.

I still kept drawing cartoons though.

Eventually, the advertising agency closed and my newfound web design skills landed me a new job as an art director/web master for a consulting firm specializing in non-profit agency work. I’ve been there ever since.

It was also during that time that I was able to co-write two books on web design and become a partner with CommunityMX – a web site dedicated to helping others learn the various aspects of web design. As a partner withCommunityMX, I developed and created a weekly web strip called CMX Suite– based on all the other CommunityMX partners.

CMX Suite has been running three straight years without a single missed deadline.

Through all this time, I also married the girl I originally met at MCAD, had two kids, continued to play baseball in a couple of men’s leagues and coached high school baseball for five years.

Looking forward to listening to this one! 🙂

Thanks for the Webcomic of the Week shout out!

[…] A few weeks later Brian's co-hosts Justin Thompson (Mythtickle) and John Sanford (Chippy & Loopus and K&J) were unavailable to record so I got to guest co-host on episode 116! Check it out here: https://comicscoasttocoast.com/episode-115-%E2%80%93-the-chris-flick-interview […]